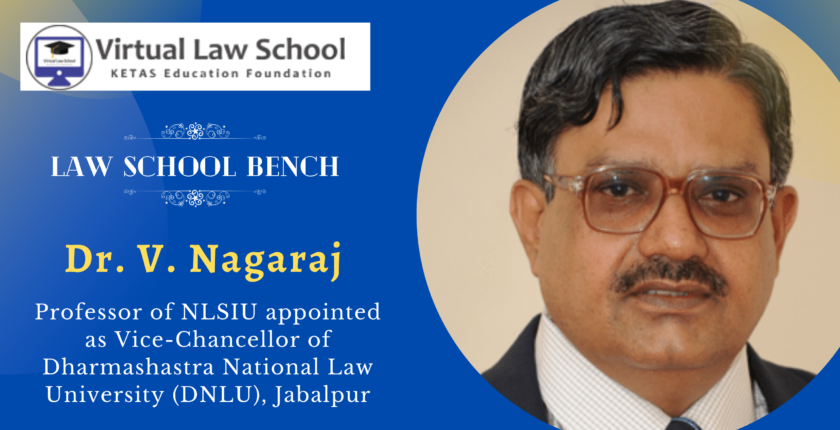 Dr. V. Nagaraj, Professor of Law and ADR Chair Professor at the National Law School of India University (NLSIU), Bengaluru has been appointed as the Vice-Chancellor of Dharmashastra National Law University (DNLU), Jabalpur. Dr. Nagaraj will have a tenure of five years as the Vice-Chancellor from the date of his joining at DNLU read the notification  of appointment issue by the Registrar of DNLU on June 16, 2021.

Dr. Nagaraj brings together 32 years of teaching experience, out of which 29 years has been exclusively at NLSIU. Besides, Dr. Nagaraj has served as the Vice-Chancellor of the National Law University Odisha (NLUO), Cuttack from March 15, 2013 to June 5, 2014. He has also held the office of the Registrar of NLSIU from September 8, 2008 to March 14, 2013. Dr. Nagaraj has been the Chairman of NLSIU’s Under-Graduate Council, during 1999-2001 and 2006-07, and Chairman, Post Graduate Council, during 2005-2006. He was a Research Scholar at Vanderbilt Law School, USA, during 1994 and at Warwick University, UK, during 1997. He was also the Coordinator of the Centre for The Institute of Law and Ethics in Medicine (TILEM) at the Law School and was in charge of the Legal Services Clinic of NLSIU.